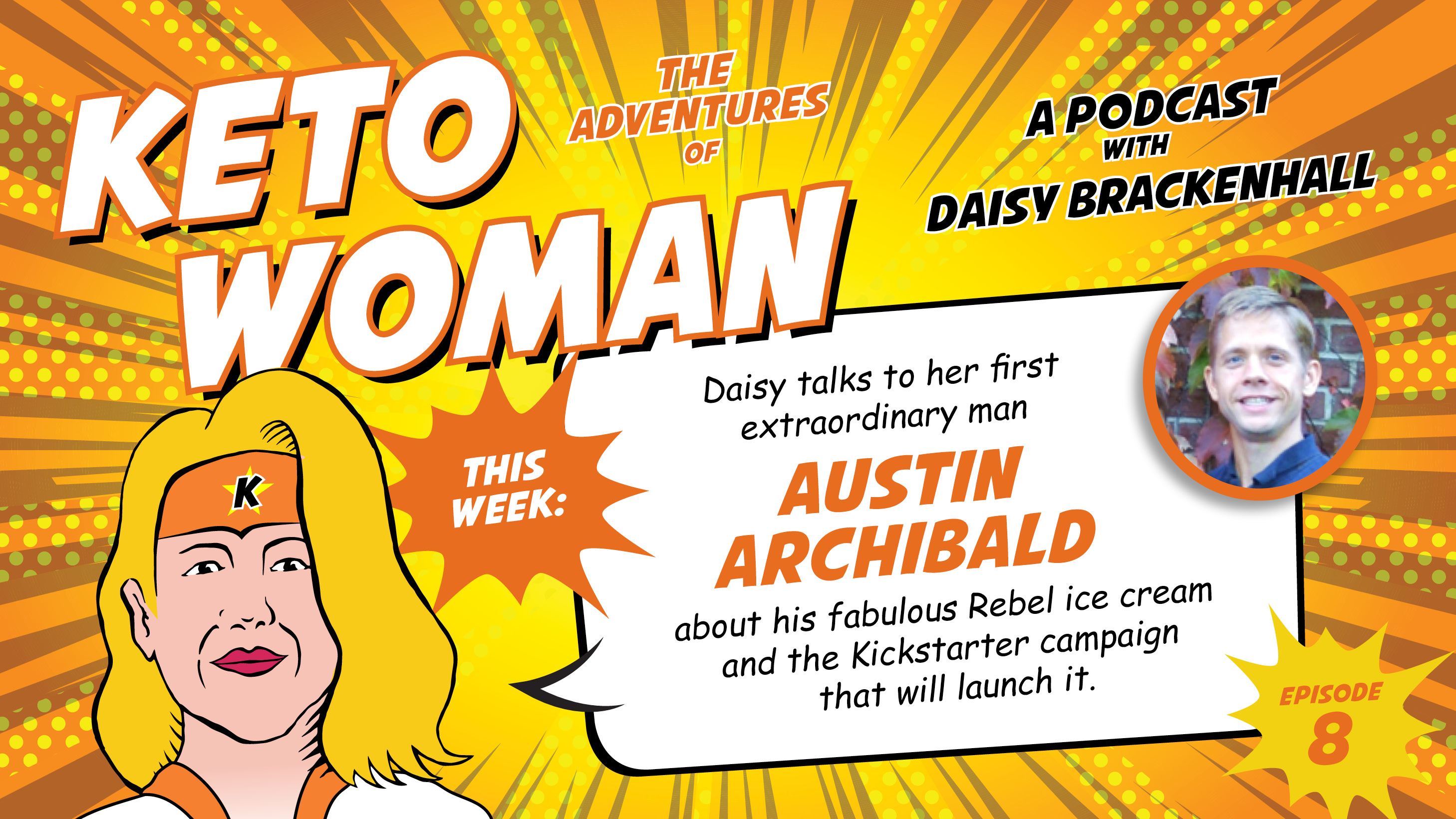 Austin and his wife Courtney grew up on the East Coast and met in college.

Austin has an MBA with a background in venture capital and analytics and Courtney has a degree in broadcasting.

They live in Midway, Utah with their four children: two girls and two boys between the ages of 1 and 7. They started a ketogenic way of eating in early 2017 and grew frustrated with commercial ice creams that were low fat, contained added sugar and/or other non-keto ingredients.

They founded Rebel Creamery to develop the first high fat, low carb, no sugar added ice cream using only keto-friendly ingredients. They also hope to use their ice cream to entice others to learn about and try a ketogenic lifestyle.

For a chance to win 4 pints of yummy Rebel ice cream, comment #RebelIceCream on any of the daily posts for this week’s show on the Keto Woman podcast’s Facebook, Instagram and Twitter pages. Anybody can play along but the lucky recipient has to live in the US. This week’s quote is from Ginger Rogers and is a sentiment I share entirely.

My love for ice cream emerged at an early age – and has never left! 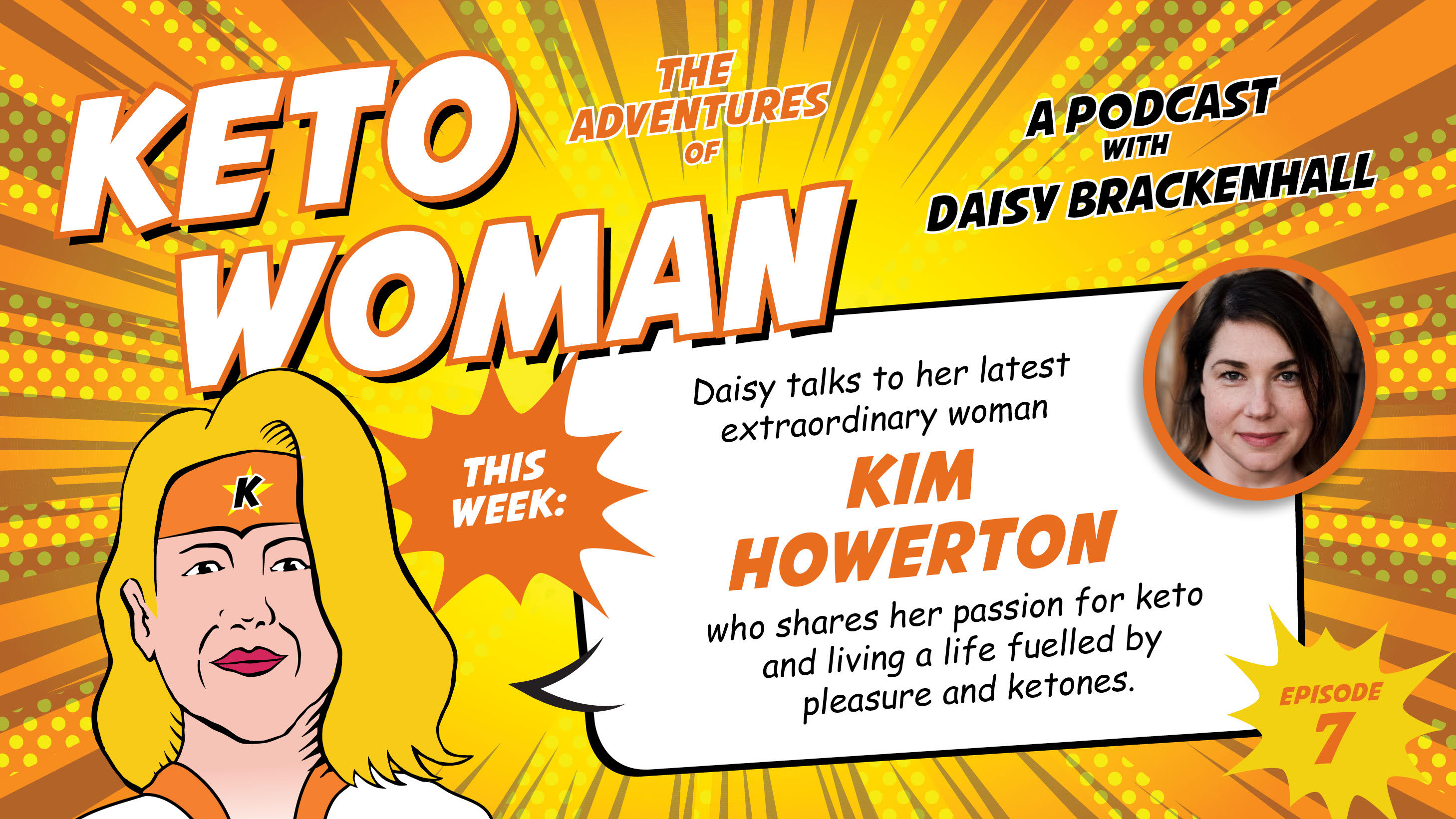 Daisy’s latest extraordinary woman, Kim, talks about her passion for Keto and living a life fuelled by pleasure and ketones. Kim Howerton struggled with her relationship with food from the time she was 8. As the years went by and her health problems mounted, she felt at the mercy of her body and out of control with her weight. A dedicated seeker of pleasure, she realised that life in a body that was always in pain was no way to live; that a pleasurable life starts by living in a body that feels good.

Enter Keto – a life that has brought together her love of satisfying, delicious foods in a way that makes her actually feel good. She now shares her love of all things Keto though group coaching as well as running a very large Facebook group about Keto called Completely Keto.

You can find Kim’s blog and coaching at theketonist.com

and her FB page at CompletelyKeto

Dreams do come true, if we only wish hard enough. 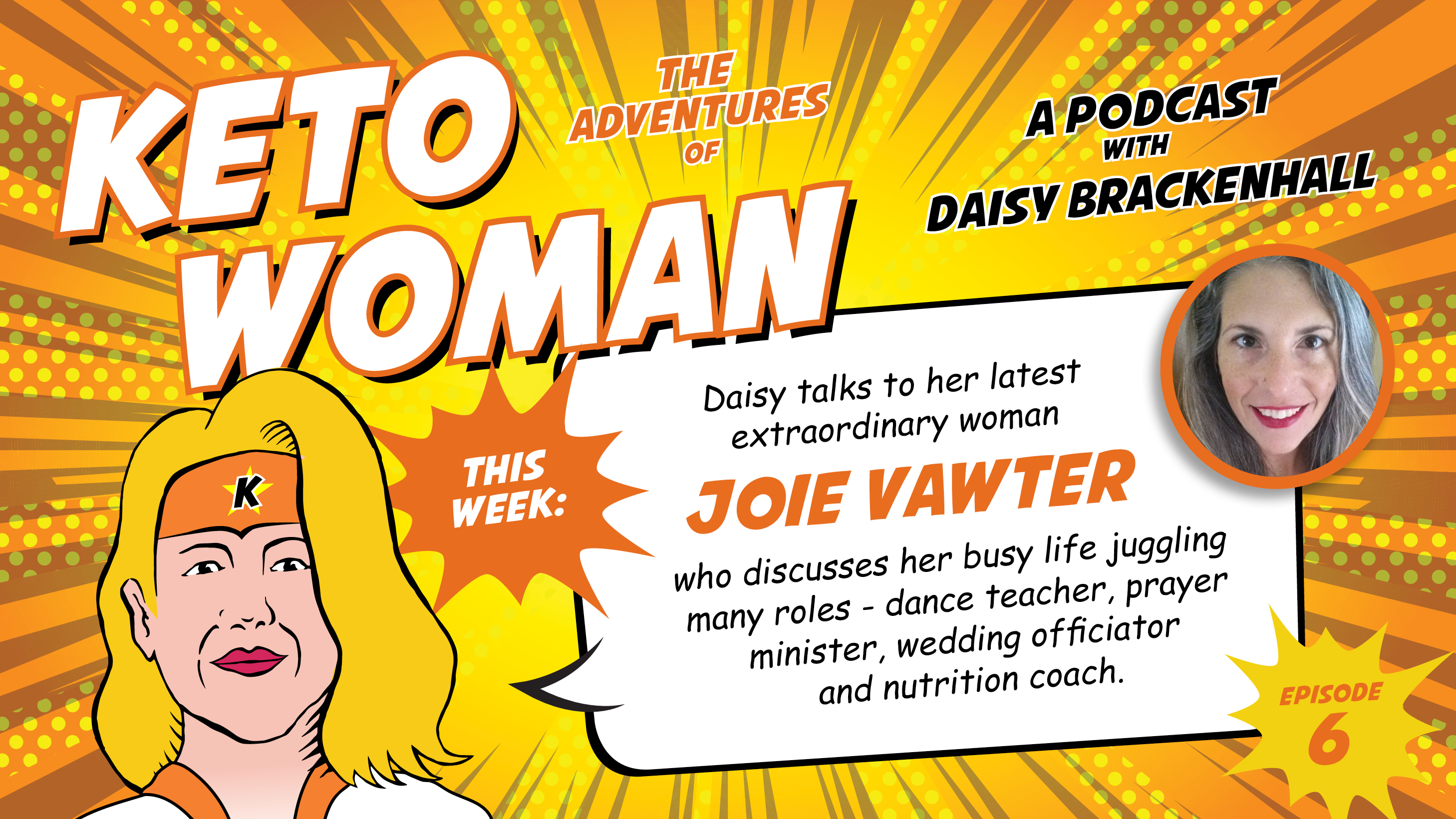 Joie Vawter is a native of Michigan.  She Ioves her life, her husband, two kids and two puppies.  Joie is an innately curious person. She has honed many skills over the years that interest her. She’s a life-time learner an that is her main hobby. For her sanity, Joie teaches dance to kids, has a ministry for prayer, and officiates weddings. Joie recently added nutrition coach to her list as well.  Joie lets off steam lifting weights and dancing Ballroom & Latin socially.

Let’s Eat for REAL with Joie!

The end quote on the show is from a Quote Investigator article. 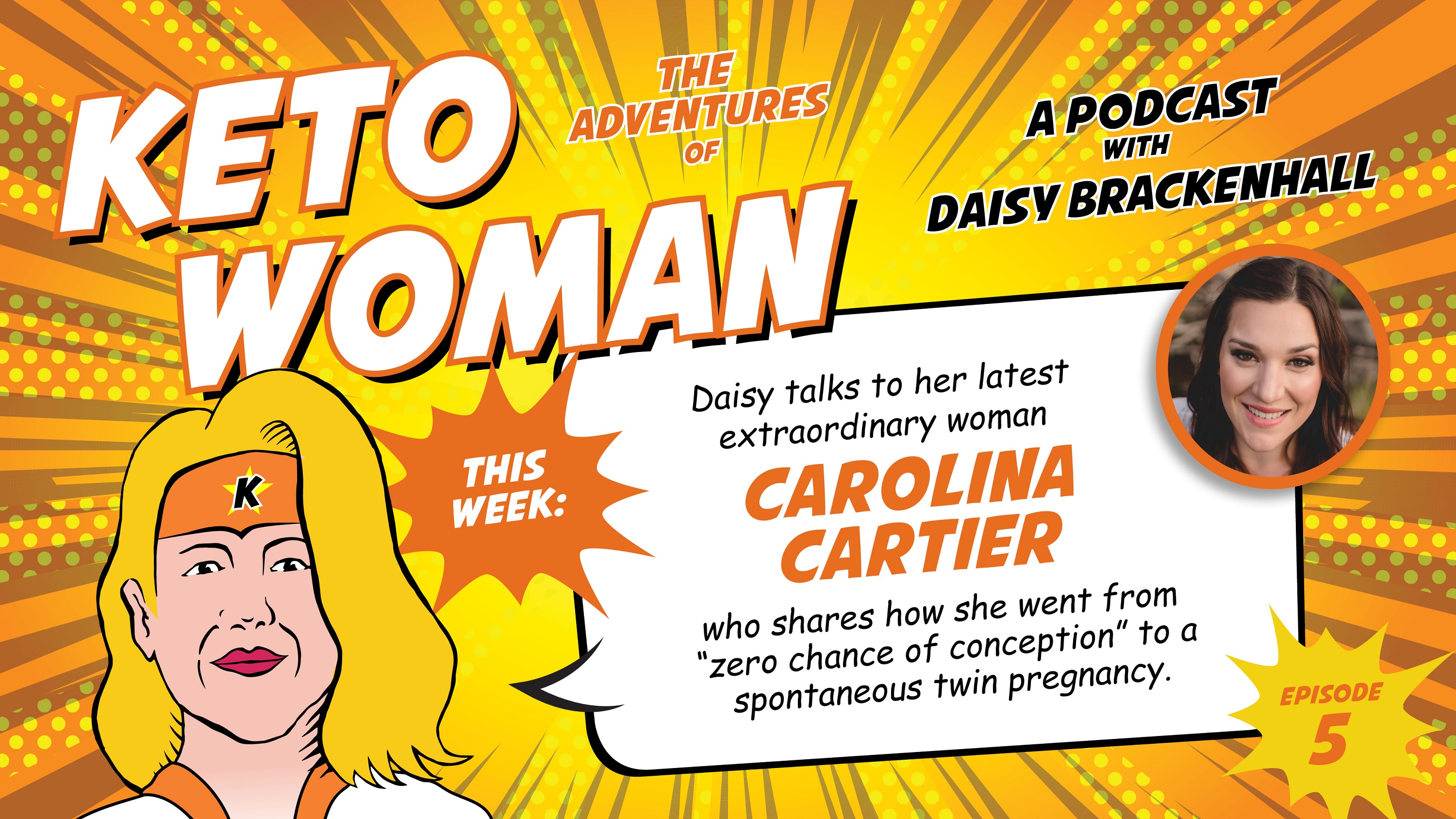 Daisy talks to her latest extraordinary woman, Carolina Cartier, who shares her incredible story from being told she would never conceive to becoming pregnant with twins. Carolina was diagnosed with precocious puberty at only 3
years old and then PCOS at 13. Her weight climbed to 380
pounds (172 kg) at its highest point. Working as a financial
analyst, she was constantly tired, foggy headed, short-
tempered and just downright miserable. She discovered the
ketogenic diet in 2014 and lost 120 pounds (54 kg) over two
years.

Even more surprising, after 19 years of no ovulation
or cycles due to PCOS, she started cycling after only four
months on keto. She is currently pregnant with
spontaneous twin boys.

Carolina’s top tip was a quote from Karen Lamb –

A year from now you will wish you
had started today

You can find out about the upcoming boot camp Carolina talked about at her Revo
Wellness website and touch base with Carolina on her Facebook page. 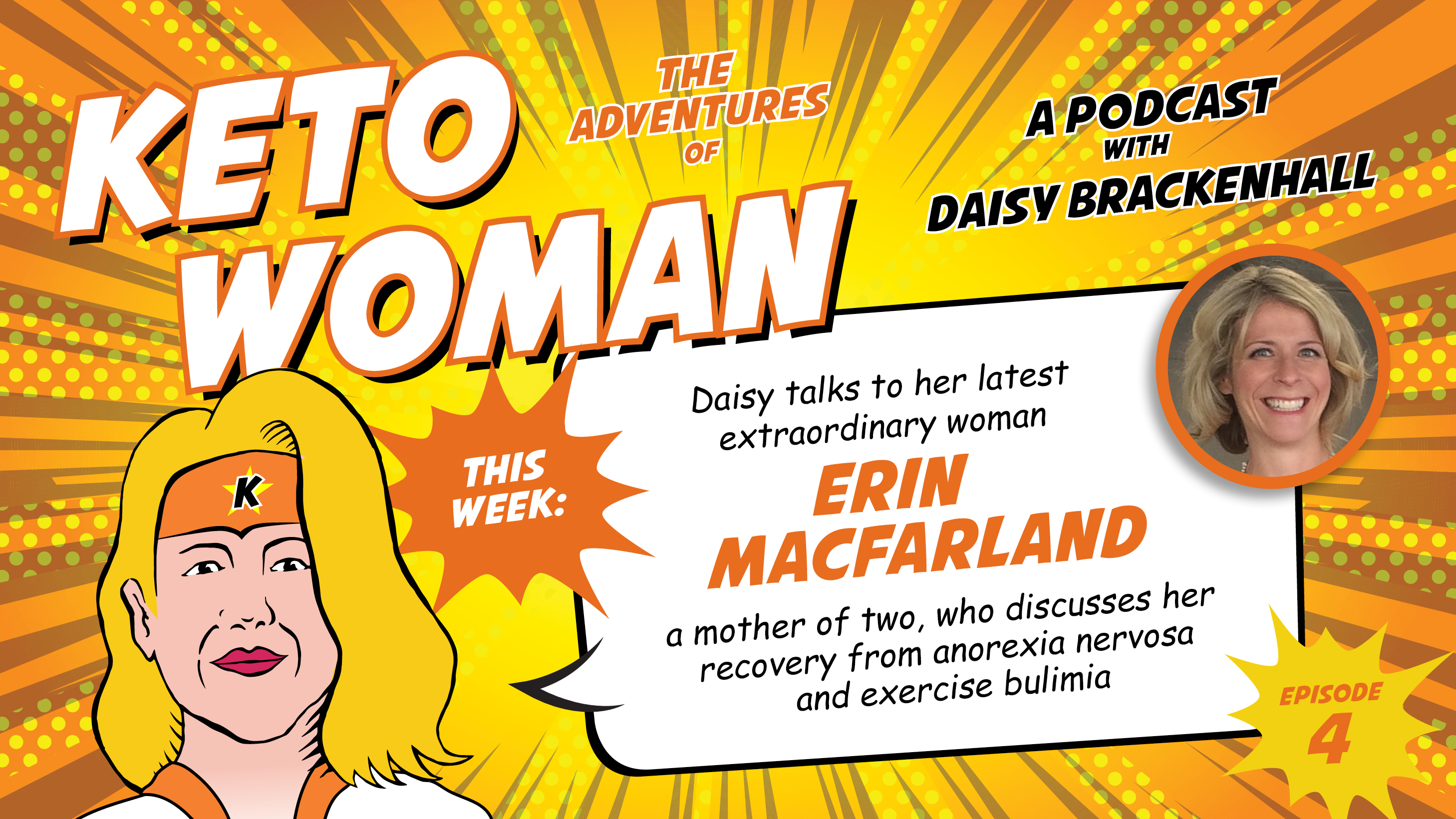 This week Daisy welcomes extraordinary woman Erin MacFarland, a mother of two, who discusses her recovery from anorexia nervosa and exercise bulimia.

Erin is a 36 year old mother of two who works part time for a local food co op, and studied sociology in college. She was diagnosed in March of this year with anorexia and exercise bulimia  and began recovery six months ago. Erin is especially keen to share what it has been like to have this disease later in life whilst raising a family. She started keto in 2015 after reading about its ability to improve athletic performance. She had taken up running after her second child was born, which she now realises was actually a symptom of her already-thriving eating disorder. She is keen to share how her eating disorder progressed and why keto affected her body in a negative way at the time but also how it addressed some health issues that had been bothering her for ages. Once she realised how easily she lost weight while eating keto, Erin had to change her approach to eating this way and manages now to eat a modified version of keto.

Websites and podcasts that Erin found useful in her research:-

Change happens when you understand what you want to change so deeply there is no reason to do anything but act in your own best interest. 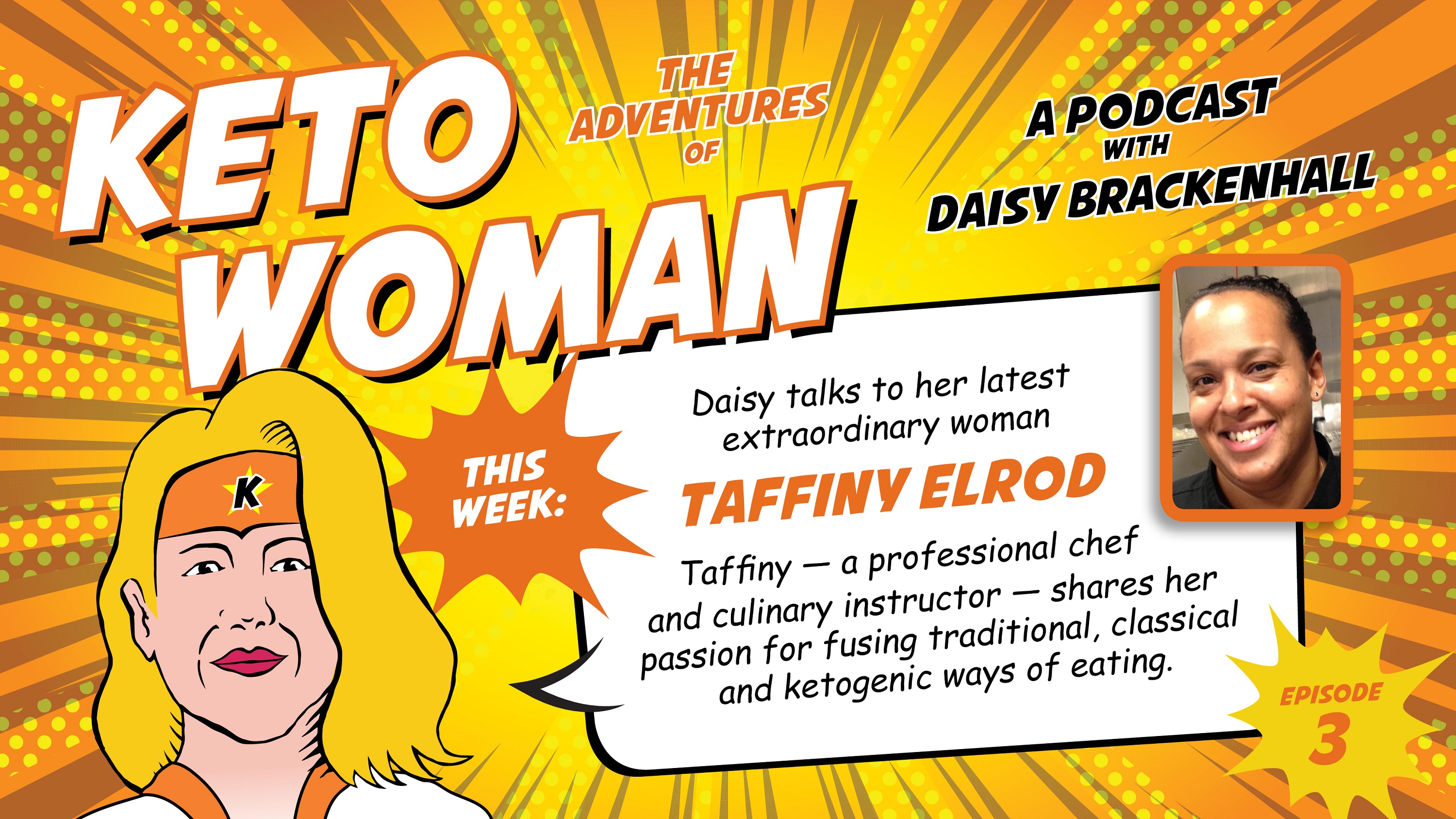 Taffiny Elrod, a professional chef and culinary instructor, shares her passion for fusing traditional, classical and ketogenic ways of eating.

Inspired by her success with her own ketogenic/Low Carb High Fat diet, she launched a cooking website called Keto Cooking School where she shares recipes and techniques, and plans to explore the connection between traditional, classical and the ketogenic way of eating.

The quote that inspired Taffiny’s top tip was from Werner Erhard;

“Create from your future not your past”

The recipes for Buffalo Wings and Argentinian Chimichurri Sauce can be found on Taffiny’s website www.ketocookingschool.com

If you want to get in touch with Taffiny, her contact details are:- 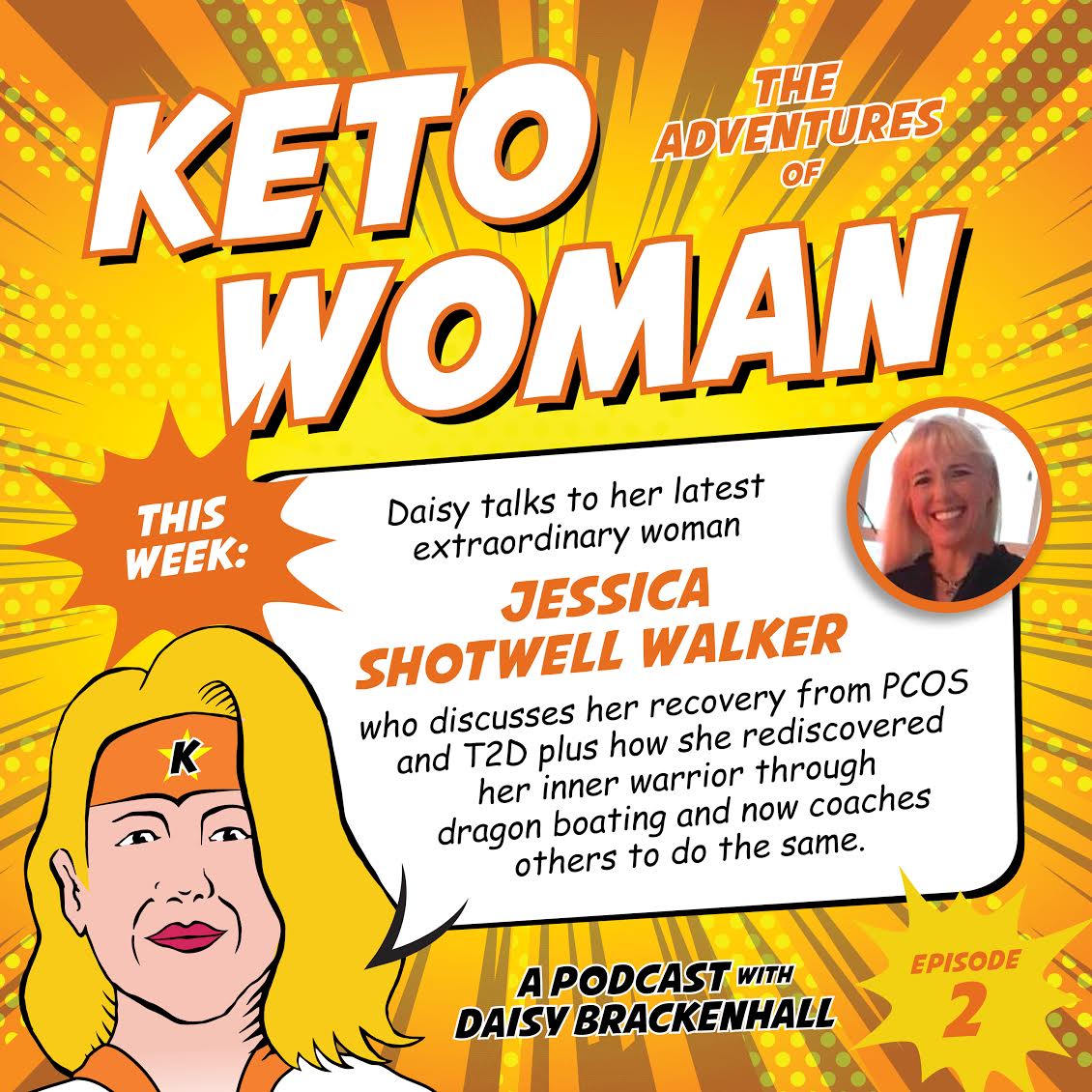 This week, Daisy talks to her latest extraordinary woman, Jessica Shotwell Walker, who discusses her recovery from PCOS and T2D plus how she rediscovered her inner warrior through dragon boating and now coaches others to do the same.

Jessica is a housewife and mother of two from Atlanta. She empowered herself by starting the ketogenic way of eating over 10 years ago and has since recovered from type 2 diabetes, PCOS and debilitating plantar fasciitis. Jessica has continued to maintain her 65lb weight loss and no longer takes diabetes medications. In her 50th year she is the energetic athlete she always wanted to be. Jessica loves tennis almost as much as dragon boat racing and plays in two leagues – USTA and ALTA. She and her USTA doubles team have earned her a spot at the USTA Georgia State Championships for the second year in a row.

She continues to be an inspirational role model in her community and was named Rotarian of the year 2016-2017 for the Rotary Club of Peachtree City Georgia for her outstanding work with her dragon boat teams. She coaches people from all walks of life (her favourite students being the absolute beginners) to work as a team in dragon boats and then go on to race. You can see photos and videos of Jessica in action training on the Rotary Club of Peachtree City Dragon Boat Festival Facebook page. 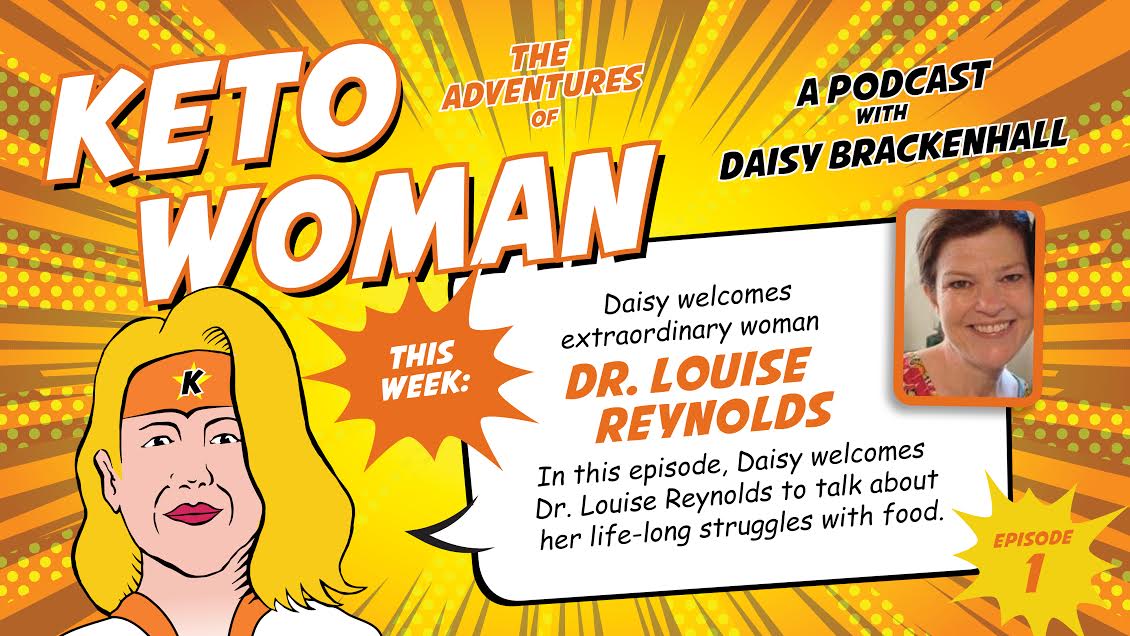 This week, Daisy talks to her first extraordinary woman, Louise Reynolds, who talks about the importance of her psychological development before and after weight loss surgery.

Louise Reynolds is a military wife to Andrew and mum to three teen boys. In her working life, she was the first Australian female paramedic to gain her PhD and then moved into university and college teaching roles. She is an admin on the Ketogenic Forums, having addressed a number of her own and her family health issues with lower carb and now Keto since late 2015. In her spare time, Louise is strength training at the gym, planning overseas travel and preparing delicious tasty (#boringketo) ‘recipppppesss’.

This podcast is possible thanks to the people who clicked on this button... Support