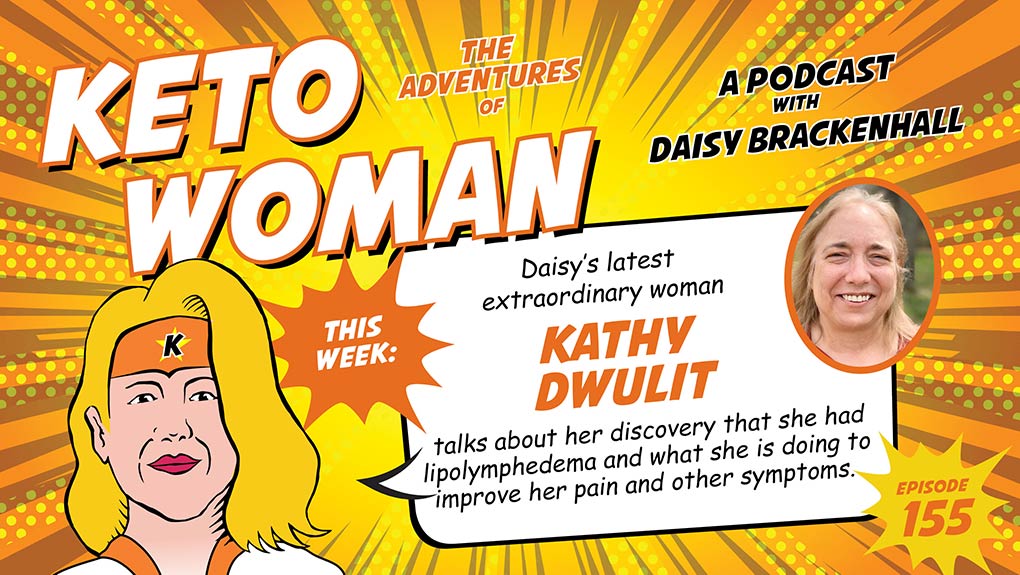 Daisy’s latest extraordinary woman, Kathy, talks about her discovery that she had stage 4 lipolymphedema as she approached her 60th birthday and what she did to start improving her pain and other symptoms.

Kathy lives in Centereach, New York with her two children and her husband of 38 years.

Kathy Dwulit came to the Lipedema Simplified Masterclass in May 2019 as a Stage 4 Lipolipedema with a myriad of comorbidities. She had a heart attack 10years ago which caused her to retire from nursing and along with a pulmonary emboli and thyroid issues she was also noticing that her mobility was beginning to get worse over time. She was about to turn 60 which was significant to her because her mother had died at age 62 and she really did not want to repeat that history for her daughters. She remembered how prematurely losing her mother affected her. If there was a chance that she could get healthier she wanted to take it. She also wanted to avoid a wheelchair. She made the decision to faithfully follow all the coach’s suggestions and teachings. She began her keto lifestyle and immediately felt no pain her lipedema legs which were usually painful. Her fellow classmates were having the same reaction.

By July, nearing her 60th birthday she noticed she had lost 20lbs. The weight loss began to feel almost effortless. Her bloodwork, particularly her AIC, a marker for diabetes, and her blood pressure was progressively improving. By the end of the six-month masterclass she had already lost 50lbs and was able to join a health gym at the suggestion of her coach, Megan who she continued with after the Masterclass. Her medication list began to lessen as well. By the beginning of 2020, the medications had decreased from sixteen to six. Her mobility had improved significantly, and she was walking independently without a cane. Working three times a week at the health gym her cardiac conditioning improved by 200 percent in two months

Despite issues with a leaky gut, Small Intestinal Bowel Overgrowth, and newly discovered intolerance to night shades she has managed to remain faithful to Keto lifestyle limiting carb intake to 20 grams as recommended by Lipedema Simplified. As of this interview she is three pounds away from having lost 100 lbs. Her A1C has gone from 6.4 to 5.5. All her doctors are amazed at her progress and encourage her to continue her efforts

Inspired by the vision of Catherine Seo with the work of Leslyn Keith, Megan Pheffer, Raeann Sparks, Mende Staggs, and the other Coaches at Lipedema Simplified Kathy is determined to give back to the Community who has given her so much. She is now the Vice President of Lipedema Project and she has completed the Professional Training from the Noakes Foundation in Low Carbohydrate High Fat/ Ketogenic Nutrition and Treatment. She is now a Mentor with Lipedema Simplified and hopes to soon to become a Coach working with Lipedema women in Stage 3 and 4.

Do You have Lipedema? Quiz

A guide to self diagnosing Lipedema and Lipo-Lymphedema

Clinicians and others who would like to promote the LCHF way of nutrition by becoming advisors can find accredited online courses and information at Nutrition-Network, from The Noakes Foundation.