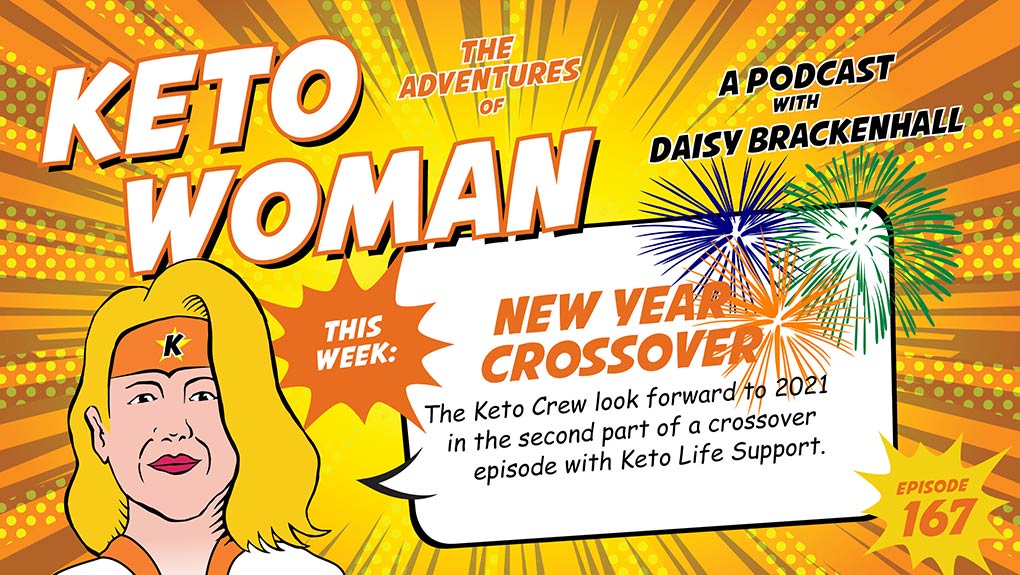 Join Daisy and Kim for a chat with their Keto Crew as they look forward to 2021 and share some top tips.

Who is in the crew? Louise Reynolds, Matt Murray, Jon Slaughter and Terri Lance.

Kim Howerton struggled with her relationship with food from the time she was 8. As the years went by and her health problems mounted, she felt at the mercy of her body and out of control with her weight. A dedicated seeker of pleasure, she realised that life in a body that was always in pain was no way to live; that a pleasurable life starts by living in a body that feels good.

Enter Keto – a life that has brought together her love of satisfying, delicious foods in a way that makes her actually feel good. She now shares her love of all things Keto by creating recipes, running a Facebook group and her podcast Keto Life Support.

Other episodes Kim has been in:

Terri has been keto for over 3 years and Paleo for 2 before that. She struggled with being overweight or obese from age of 7 until about 5 years ago and tried all types of weight loss plans and diets throughout most of her adult life.

Diagnosed with Type 2 diabetes in her early 30s, Terri was prescribed many medications, typically taking three for diabetes, a statin and an ace inhibitor. She no longer takes any prescriptions and no longer has any biomarkers of Type 2 diabetes.

Terri was a middle school English teacher at the start of her career; then went back to grad school and earned her PhD in Counseling Psychology. She was then a psychologist in private practice for over thirteen years.

Terri is now a coach with IDM’s The Fasting Method. She is the Director of Retreat Development and has hosted two fasting retreats in Hawaii.

Other episodes Terri has been in:

Louise Reynolds is a military wife to Andrew and mum to three adult sons.

In her working life, she was the first Australian female paramedic to gain her PhD and then moved into university and college teaching roles. Since late 2015, both Louise and Andrew have used low carb ketogenic way of living to address a number of health issues along with maintaining their respective weight losses.  During 2018, she took a UK ‘gap year’  living, working and traveling and discovered a new found love of pork scratchings and clotted cream where she met Jackie Fletcher.  Louise has now joined Andrew on his current posting to Bangkok, Thailand.

Other episodes Louise has been in:

Matt is 48 and lives in Delaware, which on the East Coast of the US.  He has been married for 20 years and has 3 teenage daughters, a dog and a cat.

Matt started keto four years ago after being diagnosed with T2 Diabetes and metabolic syndrome.  Through diet and other lifestyle changes Matt was able to return his health and weight to normal.  Matt recently started a skin care company called Nature’s JAM with his friend Jon Slaughter that makes all natural, small batch skin care products.

Jon Slaughter lives in a town on the mid-Atlantic seaboard of the United States near the Chesapeake Bay.

Jon stumbled upon the paleo diet while looking online for a recipe for a party.  After following a paleo diet for over a year, he learned about the ketogenic way of eating from a friend who had been diagnosed with T2 diabetes.  A proponent of natural remedies, Jon’s philosophy is “Do what you can first” instead of immediately going down the path of pharmaceuticals.

Jon loves to cook and create delicious recipes that are simple.  He has shared his keto experience and recipes with family, friends, and anyone else who wants more information.  He likes creating simple recipes that anyone can make because he believes living a ketogenic lifestyle will make for a happier planet one person at a time.

Jon’s other hobbies include hiking, kayaking, and homesteading.  He keeps a brood of hens as a source for fresh eggs, landscapes with edible and medicinal plants, makes medicinal tinctures and herbal tea blends, and makes his own personal care products such as face cream and hand salve.

Jon partnered with his best friend, Matt, to turn his hobby of making natural skin care products into a business.  Together they launched nature’s JAMTM making handmade, all natural skin care products in small batches.  “When someone uses one of our products, I not only want them to love how it makes their skin look and feel, I want the aroma to lift the person up and make them feel good.”

Other episodes Matt and Jon have been in: